Wow, it just dawned on me that I never even told you about my son’s commissioning into the US Army! In my defense, it did happen 10 weeks before I even started my blog, but still. It was kind of important. And with yesterday being Veteran’s Day, this is as good a time as any.

I could say it all started with Eric’s graduation from Texas A&M University, but really, the first event was a big surprise before he even started his freshman year. “I want to join the Corps of Cadets,” he told us.

My sensitive, nurturing response: “Who — you??!!? Seriously??” (I wasn’t being mean; he was just so happy-go-lucky that I could not see him in a structured, military-style environment like that.)

“Well, they have mandatory study time every night. I’m afraid if I don’t have something like that I’ll goof off and end up flunking out.”

Whoa. Somebody was beginning to grow up. He survived his freshman year. Here he is, before a sophomore-year football game.

At A&M, you can be in the Corps and take ROTC classes with no military commitment through your first two years. So our second surprise was near the end of his sophomore year, when Eric decided to commission with the Army. He signed up for simultaneous membership in the Corps and in Army Reserves, and began spending one weekend a month at the base in Conroe.

After his four years in the Corps, Eric married his wonderful fiancee Heather, and got ready for his “victory lap” (code for one’s second senior year.)

Before we knew it, it was time for graduation. Unlike most parents at commencement, we had no trouble spotting Eric & his buddies in the crowd: they were the ones in various military uniforms rather than caps and gowns.

The schedule was perhaps just a bit tight… It allowed about fifteen minutes for sprinting to the car through a major downpour, driving clear across campus, looking for a parking spot in the six-story garage, and racing across the almost-submerged street to the commissioning ceremony. Brent tried to keep all the relatives together and halfway dry, but we pretty much skidded into Rudder Theater, dripping wet, with all our hearts racing. No idea how Eric got there.

Then the officer introduced the candidates one by one as they came out onto the stage. 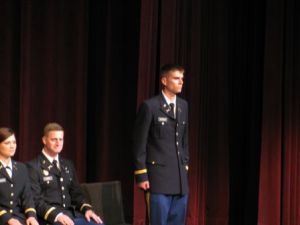 When there was just one chair left on the front row, Eric walked in. My heart got about three sizes larger. He stood at attention until the officer was finished, then sat straight and motionless through the rest of the introductions. At last they all rose, about twenty young men and women, looking solemn and dignified as they committed themselves to defend our country.

The ceremony was as gratifying as you can imagine.

Then came the really hard work. Eric asked Heather and me to “pin” his rank on. Turns out, “Pinning” is done without the help of a single pin. There are these little hook deals on the rank bars, that you’re supposed to wrestle into flat metal slots on the shoulder of the uniform. This would have been easier if Eric’s shoulder had been below eye level, but after a few awkward minutes we both managed it.

After congratulations all around, and visiting with some of the other brand-new 2nd Lieutenants and their parents, we all went out for dinner. It was a perfect ending to a significant day — significant not only to our family, but to the wider Aggie family and our whole country.

Here’s my handsome young man with his dad and grandmother. I am proud to be an Aggie Mom and an Army Mom.

PS: I am linking up today with my Company Girls friends, many of them fellow moms.

Welcome! If you like food, reading, laughing over life's little disasters, and maybe thinking about the bigger things of life, you have come to the right place. Besides blogging, I write humorous fiction, though real life tends to leave fictional humor in the shade. But I'm not a total goofball. No, really. I'm also working on a biography project. I live in North Texas with my husband, Brent. We enjoy bicycling, Mexican food, and traveling to visit our kids and grandkids.
View all posts by Jan C. Johnson →
This entry was posted in Everybody Has a Story, Uncategorized. Bookmark the permalink.