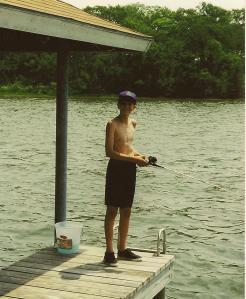 I don’t mean to rant, but I am sincerely puzzled. In an effort to be “inclusive,” our politically-correct culture seems to make the odd demand that we deny any differences between people because everyone is equal. Yes, we all have equal value — but in the past few years I have felt pressured to go farther and pretend everyone is uniform, identical. For instance, the authors of my college speech textbook (2006) discourage ever using “sexist” language — and by that they mean any word that hints at anyone’s sex. “You should never say, ‘My clergyman is a good fisherman,'” they scold. “Instead say, ‘My minister is a good angler.”

What, even when you describe a specific individual? Isn’t everyone’s sex part of their identity? Why hide it?

Suppose it was your own mother and her fishing hobby that you were talking about? “My parent is a good angler,” you obediently say, and the audience wonders why you are being so evasive. Which parent, for goodness’ sake? Is it really considered sexist to identify which sex a person belongs to? After all, if you say “My mother is a good angler/fisherman,” are you insulting men by implying that they can’t fish? Of course not! You’re just introducing one of your parents to the audience. And letting them in on the big secret as to which parent you’re talking about.

It’s as if identifying one thing excludes, or marginalizes, everything else. If it’s wrong to specify your angler’s gender because that excludes the other gender, why is it okay to specify the sport of fishing? Doesn’t that “exclude” all the baseball and hockey players, golfers and swimmers? I can hear it now: “One of my parents is good at his-or-her favorite outdoor activity.” If you’re not going to say anything, why speak?

Or take relationships, for an even worse example. These same authors admonish us fledgling public speakers to avoid using the words “husband,” “wife,” or even “spouse” while speaking. (If I acknowledge my spouse, that alienates the single people in the audience? Funny… I don’t feel alienated if a speaker mentions being single.) So, how am I supposed to refer to that guy who has committed his life to caring for me, and who has steadfastly supported my dreams and goals, standing by me through the joys and griefs of life for thirty-odd years?

Wait, climb down from that ivory tower for a minute, will you?

I have lots of ‘friends,’ from casual to close. And a ‘partner’ can be anyone from a classmate on a project, to someone you play tennis with, to a business co-owner, to a lifelong mate. Sorry if you’re offended, but I’m not lumping a treasure like Brent into the same category with that kid who worked on the titration experiment with me in high school Chemistry. I don’t even recall who it was; I was busy counting drops of sodium hydroxide solution.

(The funniest thing about this annoying textbook is that, in another chapter, the authors do a 180 and advise us to be “clear and descriptive” when speaking.)

Of course it’s wrong to ridicule someone for being different from me. I would never use racial slurs or make fun of someone with a physical or learning disability. Nor do I assume everyone shares my same marital status or race or political views. But I must insist that sometimes it’s okay to observe differences, and even point them out.

For one thing, I learn to understand one object or concept by finding out how it is different from another. I know about paintball, but how is “Airsoft” like paintball? How is it different? Okay, I understand. Or when I studied plant science at Texas A&M. I spent hours in the greenhouses comparing similar plants to each other, learning to identify them by their differences. This variety has shorter stems than the other; those two are alike except one has striped leaves. I wasn’t being exclusive, or saying stripes are better or worse; I was just learning to recognize and name the plants.

This is the same way we recognize people: by identifying details like height, hair and skin color, the shapes of their faces … you know, characteristics that distinguish one person from everyone else. Not better. Not worse. Just individual.

As near as I can figure, Billy Graham was right: we are what we are by the grace of God. Why not celebrate the dazzling variety of people and relationships that God has given us, instead of trying to cloak everyone behind a smokescreen of uniformity?

If we keep generalizing, denying differences instead of including them, “PC” will further reduce our fishermen to “bipeds who catch gilled aquatic vertebrates.” And that’s neither clear nor descriptive.

Thanks for reading!
Jan

Welcome! If you like food, reading, laughing over life's little disasters, and maybe thinking about the bigger things of life, you have come to the right place. Besides blogging, I write humorous fiction, though real life tends to leave fictional humor in the shade. But I'm not a total goofball. No, really. I'm also working on a biography project. I live in North Texas with my husband, Brent. We enjoy bicycling, Mexican food, and traveling to visit our kids and grandkids.
View all posts by Jan C. Johnson →
This entry was posted in Near As I Can Figure..., Uncategorized and tagged fishing, political correctness, politically correct, postaweek2011, sexism. Bookmark the permalink.