I am linked up with Rachel Anne and the Company Girls today. 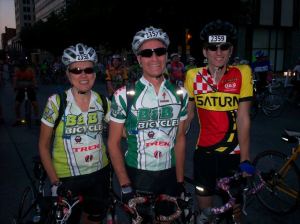 I felt like a doofus cruising around before dawn in sunglasses. I could hardly see where I was going because it was so dark. (Problem is, they’re prescription sunglasses so if I had taken them off, I still couldn’t have seen where I was going because I’m nearsighted.) Brent (Mr. Wonderful), Greg (the “Kid”) and I made our way to the downtown staging area for the 30th annual “Hotter’n Hell Hundred” bike ride.

Even though I was well trained, I still had that jittery, jumping-off-the-high-dive feeling in my stomach. After all, the forecast high was near 110. We were only doing 50 miles and would be done before noon, but it would be mighty hot when we finished.

Finally, the National Anthem / military flyover / cannon shot signaled the start. The first of 10,000 or so riders passed under the Start-Finish banner. It took us 20 minutes just to get to the banner, half a mile from our spot near the front of the 50-milers. Then we were off through town and into the prairie.

Despite my nerves, the ride itself turned out to be way easier than I expected because it was so flat and NON-windy. I wore a 50-ounce Camelbak® backpack full of ice water and carried a bottle of electrolyte drink and an extra one of water. Brent, Greg and I started off pretty fast as the sun — and temperature — rose behind us.

We stopped to regroup at the first rest stop. I’m glad we did because that’s where we ran into Jerome, a cyclist who lives in my hometown, and his son. It’s always fun to see someone you know in a mob of strangers.

Moving on, we soon split away from the longer routes, so there were only 50-milers around us. The level roads and calm winds kept me feeling stronger than I really am. It was weird riding such a flat course. Sometimes I geared up and stood out of the saddle on very slight inclines, just to rest my rear a bit. It grew hotter and hotter.

After crossing over to the north side of US-287, I noticed a helicopter flying slow and low, just a few miles away. I figured it was a news chopper, getting some video of the ride. But then it hovered and eased down to a landing, as our road turned right toward it. This couldn’t be good.

Sure enough, it was an AirEvac ambulance, airlifting an injured rider to the hospital. When we coasted to a stop, three or four hundred cyclists were already standing between us and the helicopter. It had landed right on the road, the only place possible. We stood around for ten minutes before the chopper took off.

We made one more rest stop, about 10 miles from the finish. By then, I was really feeling the heat. Bless those volunteers! I thankfully accepted an ice-cold disposable towel and downed a pint of PowerAid in short order.

But we weren’t done standing around in the sun. This last rest stop was plagued with zillions of awful, thorny burrs. Volunteers warned people to keep their bikes on the pavement, but as we left, we passed dozens of people changing flats. Next thing we knew Brent’s rear tire went flat, too. He’s a good mechanic, but it still took a few minutes to get the thing changed.

I was rapidly losing energy. In fact, at one intersection I offered to trade bikes with the motorcycle cop… with predictable results. I finally perked up as we rode through Sheppard Air Force Base. I mean, they let us ride right past the flight line. Airmen and cadets lined the course to cheer us on (and perhaps to make sure we didn’t mess with the planes). After leaving the base, we could see the city, which encouraged me that I could finish this shindig.

In the last couple of blocks, I developed a bit of tunnel vision. Crossing the finish line, my first triumphant words were “I have to get out of the sun. Right Now.” Too drained to walk over to the refreshment counter, I lay down right on the pavement, in the shade of a parked trailer, and let Brent ferry a series of Cokes and ice water to me. Greg, who had finished about four minutes ahead of us, helped by sprinkling water on me. Soon I felt up to walking into the Convention Center and schmoozing around the air-conditioned Expo with my guys.

All in all, the Hotter’n Hell was one of the best organized, most awesome rides I have done. I hear it is the largest bicycle event in the world, and I believe it. I feel no need to do it again, but it was great to be part of it with my husband and son.

Besides, the family that sweats together… sticks together!

Welcome! If you like food, reading, laughing over life's little disasters, and maybe thinking about the bigger things of life, you have come to the right place. Besides blogging, I write humorous fiction, though real life tends to leave fictional humor in the shade. But I'm not a total goofball. No, really. I'm also working on a biography project. I live in North Texas with my husband, Brent. We enjoy bicycling, Mexican food, and traveling to visit our kids and grandkids.
View all posts by Jan C. Johnson →
This entry was posted in I Remember When... (my OWN stories), Thoughts on Two Wheels. Bookmark the permalink.