Forgotten Soldiers? (Not if I can help it) 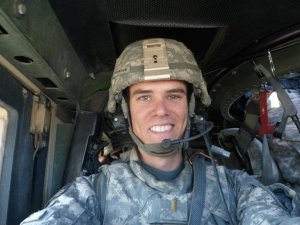 My young Lieutenant: always a smile. . .

When my son Eric was commissioned into the Army, he vowed to defend our nation. He would follow orders to the best of his ability, wherever they might take him. We wiped stray tears and “pinned” his rank onto his uniform jacket.

Then came several months of training, including specialized programs near both coasts. He learned such skills as desert survival, driving a Humvee into and out of a trench, and allowing for wind speed and type of gunpowder when aiming a Paladin self-propelled Howitzer.

How’s that for a resume builder?

Meanwhile he was also obeying orders when he enjoyed them and when he didn’t, taking responsibility for his actions, and generally growing into the kind of officer that our military wants and needs. After Field Artillery school, he and Heather were stationed at Ft. Hood, right here in Texas. They moved into a nice apartment in Killeen. 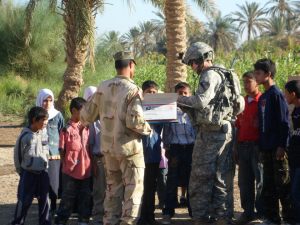 Eric and an Iraqi colleague handing out school supplies donated by his aunt's third-grade class in Houston.

By mid-July, six months later, Eric was in Iraq, earning everyone’s respect by his cordial and helpful attitude. His unit’s deployment was to be for “no more than 365 days.” No one knew what they would do after all US troops were to be out of Iraq; naturally, we at home hoped the deployment would simply be cut short.

For a while it sounded as if that might be the case, but in November we got word that Eric would be one of about 4,000 soldiers who would remain in Kuwait. Disappointment, quickly followed by adjustment. Head up, shoulders squared. 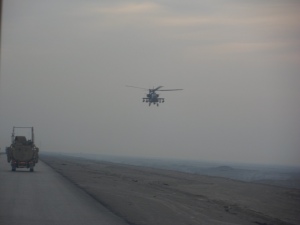 Apache helicopters escorted the convoy along the road leading to Kuwait.

And so they went, off to an area of Kuwait that makes their camp in Iraq look like a tropical resort by comparison. We keep hearing that all our troops are “home from Iraq.” Even though the Brigade put out word that some units stayed in the Middle East, this information never quite seems to get mentioned on the news. You sometimes hear about our troops in Afghanistan, and indeed they are still seeing conflict. But the news media seem unaware that 4,000 brave men and women remain in Kuwait for another five months or so.

Eric is still following orders, still doing his job and encouraging his men as they do the same. I asked him about these things during his recent R&R leave. Despite the sacrifice of being away from his wife for so long, he likes Army life. He bears the responsibility of leadership with honor and with tremendous class. And he doesn’t want any sympathy or special recognition. It is, he says, what he signed up for. Really, all he asks of us in the States is to just know that his soldiers are still overseas.

So here is my two cents: When you hear people mention that the U.S. war in Iraq is over, please remember that “out of Iraq” does not necessarily mean “home.”

PS: You are welcome to “Share” on Facebook at the bottom of this post if you are so inclined.
Also, I am linking up with Rachel Anne and our Company Girls friends, as well as with Jen and the Soli Deo Gloria girls.

Welcome! If you like food, reading, laughing over life's little disasters, and maybe thinking about the bigger things of life, you have come to the right place. Besides blogging, I write humorous fiction, though real life tends to leave fictional humor in the shade. But I'm not a total goofball. No, really. I'm also working on a biography project. I live in North Texas with my husband, Brent. We enjoy bicycling, Mexican food, and traveling to visit our kids and grandkids.
View all posts by Jan C. Johnson →
This entry was posted in Everybody Has a Story and tagged Army, artillery, duty, Iraq, Kuwait, Middle East, soldiers. Bookmark the permalink.

22 Responses to Forgotten Soldiers? (Not if I can help it)