Everything has been refreshingly peaceful on the appliance front. Once my car’s navigation system recovered from the trauma of having its maps updated, a simple process involving only two all-day road trips to the dealership, our appliances grew quiet and we all settled into a nice, smooth, efficient routine.

I should have known they were plotting a mutiny.

Two Thursday nights ago, Brent’s dinner cooled off as he ate, so he decided to re-warm it. He popped his plate into the microwave for 30 seconds. In due time Micro stopped and sounded its signal. Brent pushed the door latch button, as usual, to retrieve his plate.

This time, not only did the door stay shut, but Micro turned itself back on and started cooking again. Several fruitless button-pushing attempts later, Brent’s dinner was overheating and he had to go into full-on Rescue Mode. Against both our better judgments, he pried the door open with a table knife and the microwavery stopped.

“Finally!” he said with relief, extracting the plateful of sizzling food. Then, from force of habit, he pushed the door shut. Micro lurched and started up again. It was like being terrorized by The Thing That Wouldn’t Die, until Brent grabbed the table knife again and put a stop to it.

The edge of the door was looking a bit dinged up.

That’s when the truth struck me: the appliances* had discovered my blog posts about them! What other explanation could there be?

We unfastened the “trim kit” frame from the cabinet so we could remove and unplug the microwave, measured the opening for reference, then went on a little impromptu shopping expedition.

Best Buy, Home Depot, Lowe’s and Target yielded not a single adequate oven that would work with the trim. We flatly refused to buy another trim kit because they cost more than the microwaves. It was getting late, so we went home and somehow braved the next morning with no microwave. The anguish! For instance, I actually had to drink my coffee before it got cold.

The next evening, we ran across an electronics store in Arlington and looked there for Micro’s replacement. We found a nice oven, measured it and took it home. After we wrestled it out of its box, I held the trim up in front of it and released the door. “Clang!” The too-tall door made a nice, cheerful sound hitting the frame. We made some less cheerful sounds and boxed it back up, then set it out in the garage with the broken oven.

Next day was Saturday. We set out, determined to find a microwave. We chose one at Sears, measured it twice, and adopted our second replacement. This time we knew the door was short enough to open through the trim. Sure enough, it opened easily. Then Brent tried to mount the oven onto the little stand that holds it in place on the cabinet floor. This oven was too narrow to fit onto the stand. 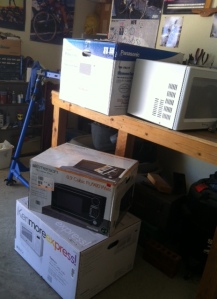 We were getting pretty good at re-boxing rejected microwaves.

On Sunday, we stopped by the storage unit and retrieved our son’s old dorm microwave until we could find a real one. By now we had a tower of four microwave ovens in our garage. They were beginning to make me nervous. Brent ended up ordering the same model microwave as the broken one, which after all had lasted five years.

Monday afternoon, we each took a reject microwave back to its store. Then on Thursday, one week after the uprising began, the new microwave arrived and the driver picked up the old one for us. Good riddance. The model had changed a bit; this oven did not quite reach all the way to the back of the stand. Don’t tell anyone, but a short piece of 2×4 filled the space perfectly.

Now all we have to deal with is the much-brighter clock light. The numbers are an intense blue and really light up the kitchen overnight. Seriously, it’s messing with my house plants’ photosynthesis cycle. But at least the door opens without taking knives to it.

And I can walk through the garage again without turning sideways.

*I have previously vented about the microwave, the washing machine, the navigation system in my car, and the vacuum cleaner.

PS: Come by the Soli Deo Gloria blog party and see what’s up with Jen and the sisters!

Also, I am linking up with Rachel Anne for some Company Girls Coffee. Why not click over and sit a spell?

Welcome! If you like food, reading, laughing over life's little disasters, and maybe thinking about the bigger things of life, you have come to the right place. Besides blogging, I write humorous fiction, though real life tends to leave fictional humor in the shade. But I'm not a total goofball. No, really. I'm also working on a biography project. I live in North Texas with my husband, Brent. We enjoy bicycling, Mexican food, and traveling to visit our kids and grandkids.
View all posts by Jan C. Johnson →
This entry was posted in I Remember When... (my OWN stories) and tagged appliances, household emergency, humor, microwave. Bookmark the permalink.