One afternoon last week I took my scruffy old yellow Lab mutt to the vet… and came home alone.

We adopted Aggie when she was about six months old. Her wide, goofy smile and mellow disposition won all our hearts.

Shortly after she joined the family I took her to obedience school, where we learned to walk together with a leash. She was a model student, sitting whenever I stopped and doing “Aggie, down” to perfection. She could “Stay,” too. When I was ready for her to move on, the signal was “Aggie, free!”

But to graduate, the dogs had to “Sit / stay” for one minute, and “Down / stay” for three minutes.

Three minutes might as well have been an eternity. Before I could say, “Aggie, free!” her enthusiasm always got the better of her and she “busted” with half a minute to go.

And yet, she overcame her early lack of education to become a top-notch “therapy” dog–for the family, at least. As she panted into even the crabbiest face, no bad mood was deep enough to withstand her adoring stare. Soon we would be rubbing her thick fur and feeling as if all was right with the world again.

Aggie wasn’t perfect, though. Her youthful quirks included chewing on wood, starting with the lattice-work around the deck. I’m convinced she numbered the slats and removed them one by one to eat. She ate the bark off our firewood,too. Every log ended up somewhere in the back yard, utterly naked.

More amusing was her uncanny ability to balance on her hind legs. Stand around eating a piece of cheese, and there she’d be–nose just below your elbow, front paws neatly folded as she kept her eyes on the prize. If you stepped away she would just follow you, still on tippy-toes.

I thought this was all cute and harmless until the day I got called out for a quick errand, just as I had fixed two Sloppy Joes and set my plate on the kitchen counter. I grabbed my purse and dashed off, leaving Aggie inside. When I came back, nothing remained on the counter except a perfectly clean plate, right where my lunch had been.

From then on, we kept food well out of reach.

As Aggie aged her hips failed her and cataracts clouded her brown eyes. By 15 1/2 years, she developed diabetes, lost weight and became both blind and deaf. Everything startled her. Seeing my girl so timid and lost broke my heart…

So last week we made one more trip to the vet. I didn’t know whether or not I would bring her home, but I knew I was going to feel guilty either way.

People can adapt to disabilities and work around them, but Aggie couldn’t understand what was wrong. I didn’t want her to be afraid any more. That’s what made up my mind. 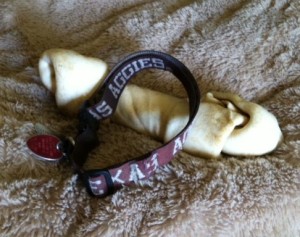 From the day you adopt a pet, you know this other day is coming. I held her while the vet sedated her. I leaned down with my cheek against her head so she could feel the vibration as I told her, “Aggie, you’re the best dog.” Then the final injection and her faithful heart came to rest.

Thanks for reading,
Jan
PS: Next time I will share the results of the poll I took last week. You can still go back one page or click here to give me your input. I value your opinion.
Jan

PS: I am linking up with Rachel Anne and the Company Girls to share some coffee and a hug.

Welcome! If you like food, reading, laughing over life's little disasters, and maybe thinking about the bigger things of life, you have come to the right place. Besides blogging, I write humorous fiction, though real life tends to leave fictional humor in the shade. But I'm not a total goofball. No, really. I'm also working on a biography project. I live in North Texas with my husband, Brent. We enjoy bicycling, Mexican food, and traveling to visit our kids and grandkids.
View all posts by Jan C. Johnson →
This entry was posted in Grief Anticipated and tagged dog, grief, loss, pet. Bookmark the permalink.