Tex-Mex In Any Other State…

I wasn’t born in Texas. We moved here when I was in the first grade. I wouldn’t so much as taste any kind of Mexican food until about ten years later.

However, I’ve been making up for lost time (and tamales) ever since. Of course, in these parts the foods are adapted to Texans’ tastes, giving rise to a sub-cuisine known as “Tex-Mex.”

One of my favorites is the chimichanga. It’s a large flour tortilla piled with a double handful of meat and/or other goodies, rolled up with both ends closed, then–and this is the key to its crispy greatness–deep-fried.

The resulting entree is roughly the size of an overstuffed 6-inch sub sandwich, or Shaquille O’Neal’s right thumb, whichever frame of reference works for you. Some chefs top them with cheese sauce or a salsa, but the standard is a dollop each of sour cream and guacamole. These toppings perch waaay up on the chimichanga, trying not to get dizzy and fall headlong into the side of shredded lettuce and pico de gallo.

I don’t get out of Texas too often, so I’m spoiled to my idea of Mexican food. However, when traveling, I know not to expect actual Tex-Mex. And I like to think of myself as a fairly unflappable traveler, going with the flow and not complaining that “this ain’t like Plato Loco makes it” or whatever. 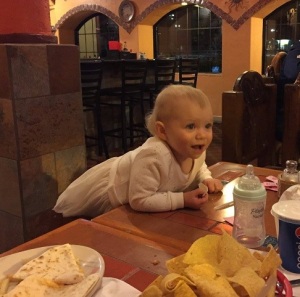 During my last trip to Washington state, we all went to the (one) local Mexican place for dinner. Yaay, the menu included chimichangas, and I was kind of hungry for one. Oddly, though, it was part of a combo that also included a tamale. As if anyone could eat a chimichanga and anything else.

Oh well, I could get a to-go box for the excess.

My plate arrived, loaded with the tamale, rice, beans, and some shredded lettuce. Beside the lettuce sat a dollop of sour cream and another of guacamole. Notably absent was any sign of a chimichanga.

You know… the entree.

Deciding embarrassment was better than starvation, I turned to the waiter. “Umm… the chimichanga…?”

With a puzzled frown, he pointed to the sour cream-guacamole duo. “It’s right there.”

I lifted the guacamole with an exploratory fork and found one open end of a small, rolled-up, meat-filled tortilla.

“OH, THERE IT IS!!” I proclaimed triumphantly.

Yes, I actually said that out loud.

On the bright side… embarrassment did, in fact, turn out to be better than starvation.

And I didn’t even need that to-go box.

Welcome! If you like food, reading, laughing over life's little disasters, and maybe thinking about the bigger things of life, you have come to the right place. Besides blogging, I write humorous fiction, though real life tends to leave fictional humor in the shade. But I'm not a total goofball. No, really. I'm also working on a biography project. I live in North Texas with my husband, Brent. We enjoy bicycling, Mexican food, and traveling to visit our kids and grandkids.
View all posts by Jan C. Johnson →
This entry was posted in I Remember When... (my OWN stories) and tagged chimichanga, dining, food, funny, humor, Janice C Johnson, Mexican food, Pacific Northwest, Tex-Mex, travel. Bookmark the permalink.

6 Responses to Tex-Mex In Any Other State…