Last week — May 5, to be exact — I flew to the Seattle area for some weekend Grandma time. Here are a few notable things I remember from my trip. 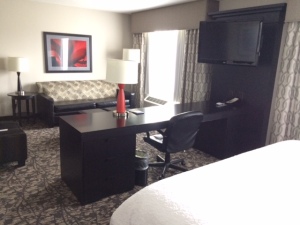 My surprisingly spacious hotel room. We’ve stayed here before, in normal hotel rooms. Somehow I was assigned this suite with a living area — and a kitchenette by the entrance. It was, like, the Taj Mahotel or something. Not only could I sprawl and read (at least, I could have if I’d spent enough time in the room), but the coffeemaker was not in the same room as the toilet. A real step up, in my opinion. 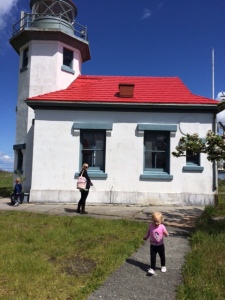 This cool lighthouse that we were going to tour but couldn’t because somebody was having a wedding there. From the outside, it looks like it would comfortably seat about ten guests… if three of them were underweight.

The exuberant display of flowers on this shrub on the lawn of the family’s church. It was a great place for the kids to enjoy their after-church cookies. Bonus: It’s big enough to climb.

The quick Caesar wrap I grabbed at Sea-Tac Airport before my flight home. In a commendable effort at maintaining freshness, someone had rolled the poor thing in Eight Layers of Micro-thin Plastic Wrap (yes, I counted as I unrolled) before encasing it in a cellophane overwrap. The overwrap was fastened with a sticker and roughly a teaspoon of Super glue. Seriously, I thought I wouldn’t be able to infiltrate to the actual food until time to board.

Anyway, I’m home now. Time to get back to work…. before my next adventure, that is.

Thanks for reading!
Jan

PS: Like many norteños, I was surprised to learn that Cinco de Mayo is not Mexican Independence Day. According to this post on Vox.com, Mexico actually declared independence from Spain on September 16, 1810. Cinco de Mayo commemorates a victorious battle against invading French forces. This battle took place at the town of Puebla more than 50 years after Independence Day. Though the French eventually took over, the battle served as a symbol of resistance.
US commercialization of this holiday, as with many others, seems to have diluted its meaning.
jj

Welcome! If you like food, reading, laughing over life's little disasters, and maybe thinking about the bigger things of life, you have come to the right place. Besides blogging, I write humorous fiction, though real life tends to leave fictional humor in the shade. But I'm not a total goofball. No, really. I'm also working on a biography project. I live in North Texas with my husband, Brent. We enjoy bicycling, Mexican food, and traveling to visit our kids and grandkids.
View all posts by Jan C. Johnson →
This entry was posted in I Remember When... (my OWN stories) and tagged Caesar wrap, cinco de mayo, German Lopez, grandchildren, grandparenting, humor, Janice C Johnson, lighthouse, Pacific Northwest, PNW, travel, vending machines. Bookmark the permalink.
%d bloggers like this: