I wanted to share this post with you because it gives a northerner’s charming take on our treasured Southern tradition of eating blackeye peas on New Year’s Day. The post first appeared December 31, 2017 on Carolee’s blog “Herbal Blessings.” Carolee is my online gardening friend– At least, I drool over the pictures of her robust kitchen garden, and enjoy her stories. You can visit her here.

Take it away, Carolee!

Posted on December 31, 2017 by carolee
I grew up on a farm, two miles from a town that we rarely visited except to go to school and church, and on Friday nights during basketball season. (This is Indiana, after all, and high school basketball was almost a religious experience.) Holidays were not given a lot of attention, other than Christmas. New Year’s Day was just another day of doing chores, at least until we got a television, and then watching the Rose Parade became a welcome tradition.

So as an adult when I moved to a city and met Cherie, a true southern lady who was aghast that I didn’t eat blackeye peas on New Year’s Day to ensure good luck in the coming year, it was a revelation. She was so adamant that I was instantly converted to believer. Decades and decades later, that tradition is still followed in my home.

Cherie grew up with a traditional blackeye pea dish in which the peas are simmered all day with ham hocks or pork belly until tender. Collard greens were also part of the mix. To me, blackeye peas are confusing, because they actually resemble beans much, much more than they resemble peas. Cherie’s dish was not especially to my northern taste bud’s liking, so early on I developed this blackeye pea salsa that is our New Year’s tradition, and many years later published it in my first book, “Herbal Beginnings.” If you have the book, it’s listed as “New Year’s Day Salsa.”

To Cherie’s horror, I use canned peas. 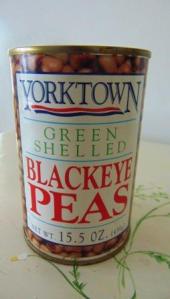 Here’s the recipe: Drain 1 can blackeye peas and place in a mixing bowl with 4 Roma tomatoes, diced; 1/2 c. chopped red onion; 1/2 a large green pepper, diced; 1/4-1/2 c. chopped fresh cilantro; 1 (or more to your liking) fresh jalapeno pepper, finely diced; juice of a lime, salt and pepper to taste. Allow salsa to rest a few minutes for flavors to develop.

I generally serve it with grilled tilapia, a healthier choice than chips. Nothing flashy, but it seems to work. I feel I’ve had very good luck in the years since I’ve eaten them on New Year’s Day. 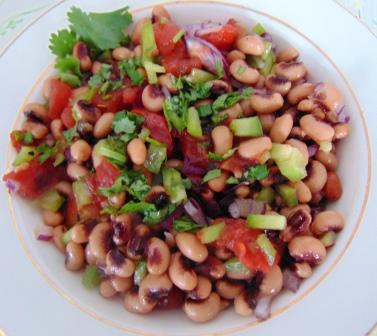 As I surveyed the seed catalogs this week, I found that a Hoosier seed store actually carries blackeye peas. The varieties they offer are “California Blackeye #46,” “Pink Eye Purple Hull,” and “Queen Anne Blackeye.” I’ll have to do some research to see which type I’ll grow, because I suspect if an anonymous can of blackeye peas can bring good luck, then blackeye peas that have been lovingly planted, carefully tended in my organic potager, harvested and stored at precisely the right time should be even luckier. Don’t you agree? Besides, it’s always fun to try something new, and I’ve never grown them before. I wonder if the flavor difference between homegrown and canned will be as pronounced as it is for green beans. It will be fun to find out!

What New Year traditions do you keep? Tell me about it in the “Leave a Reply” box below the post.

Welcome! If you like food, reading, laughing over life's little disasters, and maybe thinking about the bigger things of life, you have come to the right place. Besides blogging, I write humorous fiction, though real life tends to leave fictional humor in the shade. But I'm not a total goofball. No, really. I'm also working on a biography project. I live in North Texas with my husband, Brent. We enjoy bicycling, Mexican food, and traveling to visit our kids and grandkids.
View all posts by Jan C. Johnson →
This entry was posted in Everybody Has a Story and tagged blackeye peas, food, gardening, Herbal Blessings Blog, Janice C Johnson, new year, recipes, Texas Caviar. Bookmark the permalink.