You walk away from the house and the cantankerous appliances for, like, 30 hours, and what happens?

Portable electronics take up the rebellion, of course.

August 4 was our first time to participate in the “Blazin’ Saddle” bike rally in Granbury, Texas. Brent signed up for the 75-mile route, while I signed up for “Start with the 20-milers and see how it goes.”

We drove part of the route the evening before, taking special note of the infamous “Skulls Crossing” area. It’s pretty much a dry creek bed except when it rains, which it wasn’t going to. The road dips steeply down and even more steeply up, a 16-percent grade. Fortunately, the climb is short, but really. I wasn’t sure either hip or knee joints would survive.

After a decent night’s sleep at the motel, we ate while loading our bikes and stuff in the car. Then we lined up at the junior high school with lots and lots of other people…

Even though I’ve had a Garmin bike computer for several months, I keep forgetting to activate it when rides actually start. Sure enough, I wobbled through the first quarter mile, tryna push the right buttons to START RIDE.

My proudest moment was when I climbed up Skulls Crossing without having to get off and walk. 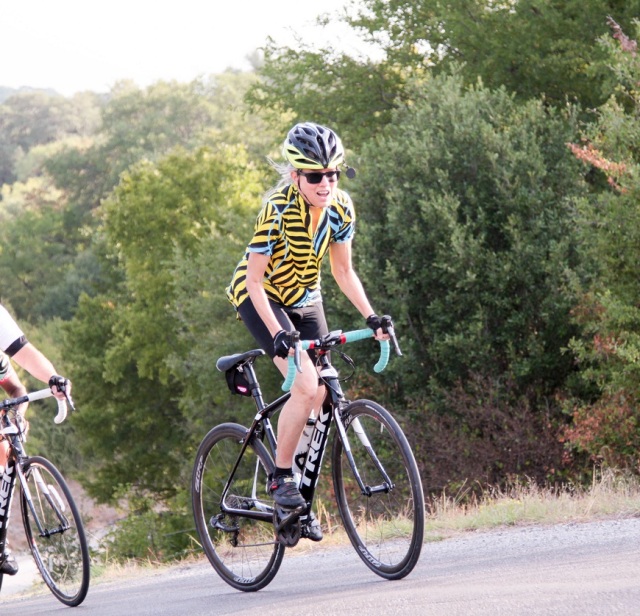 The ride went smoothly from there. Somehow none of the other climbs seemed very challenging compared to that SIXTEEN PERCENT Skulls Crossing. >shudders<

Even as I approached "The Peaks," a ridge rising abruptly from the rolling hills, I couldn't complain. Then the road turned toward the north and fell away in a long, straight, beautiful downhill. I reached to push the "Lap" button on my computer, so I could easily find the location when I uploaded the map later.

Unfortunately, I accidentally hit "Pause" instead. I quickly realized this and frantically pushed buttons to get the computer recording again before I picked up too much speed.

It must have been fifteen minutes later when I checked my distance and elapsed time. Then checked again after a few more minutes, only to find the same readings.

THE COMPUTER IS STILL PAUSED!

I started it recording again, but that lovely downhill run is now unprovable, as is my total distance.

Meanwhile, on the Super Long Route, Brent was having troubles of his own.

Like me, it started shortly after the ride began, when he hit a bump and one of his water bottles bounced right out of its cage on the frame. One of the good bottles… so he had to retrieve it, losing the pack he’d started out with.

Later, in an especially scenic stretch, he decided to take a picture. Without stopping, of course. So he pulled his new phone out and opened the camera, intending to use the volume button to snap the photo one-handed.

Imagine his surprise when the phone started vibrating and emitting a loud DEFCON 1–type sound. Something popped up on the screen and Brent’s finger brushed it as he was trying to make the noise stop.

Conceding defeat, he stopped so he could use both hands to silence his phone. At last he managed to tap the Disconnect button.

The dispatcher was understanding but amused at Brent’s predicament. I’m sure that wasn’t the first time something like that had happened.

Between the two of us, we’re unbeatable. I mean, we should be in the Olympics, right? I’m not sure what sport we’d fit under…

Welcome! If you like food, reading, laughing over life's little disasters, and maybe thinking about the bigger things of life, you have come to the right place. Besides blogging, I write humorous fiction, though real life tends to leave fictional humor in the shade. But I'm not a total goofball. No, really. I'm also working on a biography project. I live in North Texas with my husband, Brent. We enjoy bicycling, Mexican food, and traveling to visit our kids and grandkids.
View all posts by Jan C. Johnson →
This entry was posted in A Page From My Journal, Thoughts on Two Wheels and tagged bicycling, bike, bike FAIL, Blazin Saddle, Granbury, Granbury TX, humor, Janice C Johnson. Bookmark the permalink.