So, our big adventure this fall was our first-ever trip to Europe. Call us ambitious, but we’d booked an 8-day bicycle tour for the first week of October… then our older son got stationed in Germany and moved his family there over the summer.

“As long as we’re flying across the ocean anyway…….”

I’ll tell you, going from North Texas where everything was built between the 1870s and last week, to Europe, was like traveling through time.

First stop, Florence (Firenza): Our hotel was a 17th-century building renovated into a hotel, with original art still on the ceilings. I kid you not, we had baby angels on the ceiling in our room. Favorite thing: Breakfast was included. They even offered “American” coffee, which was strong enough to carry our suitcases for us. They also offered cappuccinos. Even non-coffee-drinker Brent accepted one, both mornings. 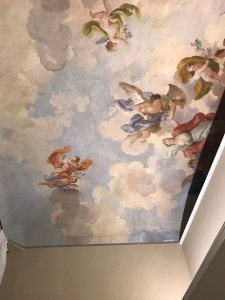 Asciano: We stayed in a 14th-century gristmill, owned by one of our guides and now operating as a B&B named Il Molinello, meaning “Little Mill.” The cottages aren’t new, but still appear much younger than even the “modern” 18th-century addition to the original mill… not to mention the remnants of an Etruscan irrigation pipe dating from the 7th century BC. 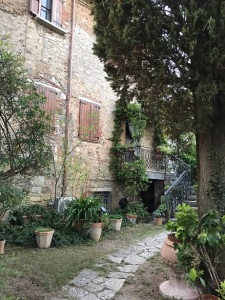 I felt silly, fussing because I had trouble connecting to WiFi…..

Each morning at breakfast, our hostess offered cappuccinos. I had one… or two… -ish. Brent had one each morning.

Siena: Oooh, a modern hotel. We didn’t know how to act. But at breakfast, we both made ourselves at home in front of the self-serve cappuccino machine.

Radda in Chianti: We stayed in an 18th-century palace renovated into a hotel. It charmed me with original-looking beams in the ceiling and old brick trim around the windows. Oddly out of place was the modern bathroom with a weird “sink” so shallow it only served to splash water out whenever we washed our hands. And forget about washing out any clothes in there.
Breakfast? Delicious. And, mmmmm… cappuccinos…

After all the cycling and wine-tasting and olive-oil drizzling and overstuffing ourselves at dinner every night, we parted ways with our guides and fellow tour participants and flew to Munich.

Guess what? They have old buildings in Germany, too.

We had a great time visiting the kids. One evening we hiked up to this little 13th-century fixer-upper that used to be a castle. No roof or floors, but the gun slits in the walls were still in fine condition, thank you.

Next time, I’ll tell you about the bicycling, which was originally the whole point of the trip.

Meanwhile, I’m getting my head firmly back into the 21st century. Now, for a cappuccino….

Welcome! If you like food, reading, laughing over life's little disasters, and maybe thinking about the bigger things of life, you have come to the right place. Besides blogging, I write humorous fiction, though real life tends to leave fictional humor in the shade. But I'm not a total goofball. No, really. I'm also working on a biography project. I live in North Texas with my husband, Brent. We enjoy bicycling, Mexican food, and traveling to visit our kids and grandkids.
View all posts by Jan C. Johnson →
This entry was posted in I Remember When... (my OWN stories), Thoughts on Two Wheels. Bookmark the permalink.